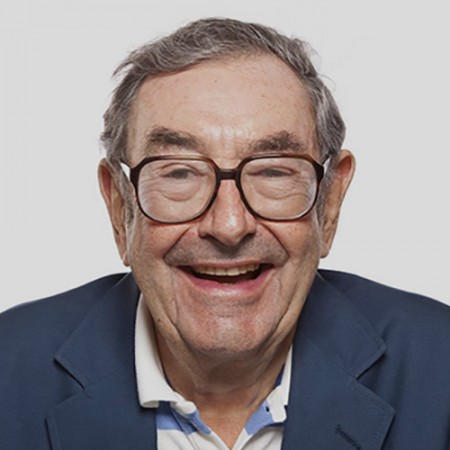 Harry B. Gray, PhD, Arnold O. Beckman Professor of Chemistry; Founding Director, Beckman Institute.
After graduate work in inorganic chemistry at Northwestern University and postdoctoral research at the University of Copenhagen, he joined the chemistry faculty at Columbia University, where he developed ligand field theory to interpret the electronic structures and reactions of transition metal complexes.

After moving to Caltech in 1966, he began work in biological inorganic chemistry and inorganic photochemistry that led to molecular systems for the storage of solar energy. In the 1980s, he and coworkers demonstrated that electrons can tunnel rapidly over long molecular distances through folded polypeptide structures. This discovery shed new light on the mechanisms of electron flow through proteins that function in respiration and photosynthesis.

Gray has published over 900 research papers and 18 books. For his leadership in science he has received many prestigious awards including the National Medal of Science from President Ronald Reagan (1986); the Pauling Medal (1986); the Waterford Award of the Scripps Research Institute (1991); the Linderstrøm-Lang Prize from Denmark (1992); the Harvey Prize from the Technion (2000); the ACS New York Nichols Medal (2003); the Dwyer Medal from Australia (2003); the National Academy of Sciences Award in Chemical Sciences (2003); the Benjamin Franklin Medal in Chemistry (2004); the City of Florence (Italy) Prize in Molecular Sciences (2006); the IC Chemistry Award from Japan (2010); the Othmer Gold Medal (2013); six national awards from the American Chemical Society and 19 honorary doctorates.