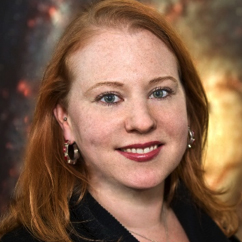 Bio – Dr. Jennifer Stern is a Planetary Scientist at NASA Goddard Space Flight Center in Greenbelt, MD, specializing in the study of the molecular and stable isotope chemistry of planetary atmospheres and surfaces, as well as instrument development for these measurements. She is a member of the Mars Science Laboratory (MSL) Rover Curiosity, Sample Analysis at Mars (SAM), and Dragonfly Mass Spectrometer (DrAMS) teams.

Abstract Body: Life on Earth evolved metabolic pathways to fix atmospheric nitrogen to more biochemically available molecules for use in proteins and informational polymers. For this reason, “Follow the nitrogen” has been proposed as a strategy in the search for life on Mars. We discuss detections of fixed nitrogen on Mars by the Mars Science Laboratory (MSL) Curiosity Rover, recent evidence of nitrogen-bearing compounds in Martian meteorites, and nitrogen systematics in terrestrial analogs to illuminate the role of nitrogen in the habitability on Mars.