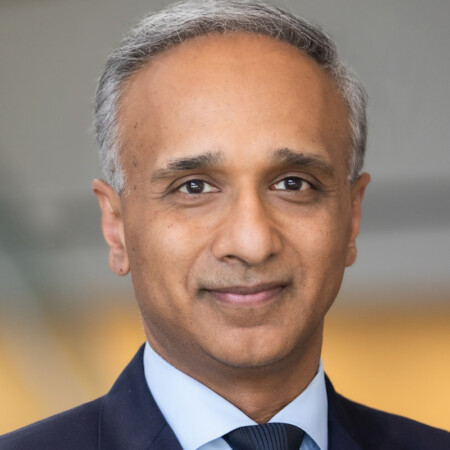 As Global Head of R&D at the Janssen Pharmaceutical Companies of Johnson & Johnson, Mathai’s mission is to focus the energy of the best research and development teams in the world at the intersection of profound unmet medical need and actionable breakthroughs in science and technology to make medicines of unequivocal benefit for humanity. The team works across a wide range of therapeutic areas and biological pathways. Janssen’s approach to medicines is patient-focused, agnostic to both source of the idea and the treatment modality. The team is invested deeply in data sciences in every aspect of R&D. Janssen R&D has fueled the growth of Janssen to be one of the largest pharmaceutical companies in the world.

Prior to joining Janssen in June 2017, Mathai was Senior Vice President at Merck Research Laboratories, responsible for research in the areas of Cardiovascular, Metabolic and Renal Diseases, Oncology/lmmuno-Oncology and Immunology. Jointly with his team, he initiated numerous new programs and progressed eight into early clinical development. Prior to Merck, Mathai led R&D at Theravance, a company he co-founded in the San Francisco Bay Area in 1997 based on his work at Harvard University. His talented team of 200 scientists nominated 31 development candidates in 17 years, created five approved products and created a pipeline containing many additional late development-stage compounds. In 2014, he and the Theravance Leadership Team separated Theravance into two publicly traded companies: lnnoviva (INVA) and Theravance Biopharma (TBPH).

Mathai has more than 150 peer-reviewed publications and patents and serves on various boards and advisory committees. He received his M.D. from Harvard Medical School/Massachusetts Institute of Technology (HST program) and his Ph.D. in Chemistry from Harvard University’s Department of Chemistry, working with George Whitesides. He received his BSc in Chemistry and Biochemistry from Dalhousie University in Halifax, Nova Scotia.